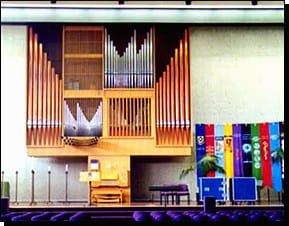 For many years, the University of Queensland at St. Lucia suffered the lack of a multi-purpose concert hall, with most graduation ceremonies, large orations and other such events taking place at Brisbane City Hall.  In the 1970’s, Robin Gibson, the architect for many public buildings in Brisbane (most notably the Southbank complex of halls, theatres, library and museum) proposed a very original and acoustically interesting design for Mayne Hall, situated on the lawns in front of the main facade of the University.

A pipe organ was an integral part of the design, and Roger Pogson of Sydney was engaged as builder. The instrument including casework was constructed by Laukhuff of Germany, before installation and voicing by Pogson himself.

The instrument, like the building, was expected to be multifunctional, but it is doubtful that the instrument is as versatile as its surroundings.  The specification may lead one to expect that all schools of organ music may be played on it.  However, some styles are more successfully managed than others.  The Orgelbewegung style caters for the Baroque, as well as some neo-Baroque and twentieth Century styles, and the inclusion of a Jeu de Tierces on Swell and Great allows for the classical French repertoire.  However, the immediacy of the position and the lack of reverberation in the hall (less than two seconds) limit the authentic rendition of the Romantic Schools, whether they be English, French or German!

In 2004, the building was converted into the Mayne Centre which houses the University of Queensland Art collection. Basically, a set of galleries was added into the centre of the hall. The interior has completely changed and is now more interesting acoustically. Whilst the organ is not as visible as before, the sound of the organ in the various spaces is warmer and more exciting. Recent concerts at the Centre have shown that this venue is still one of the best musical spaces for hearing fine organ music. There is a link on our site to the series of concerts being held on this organ.