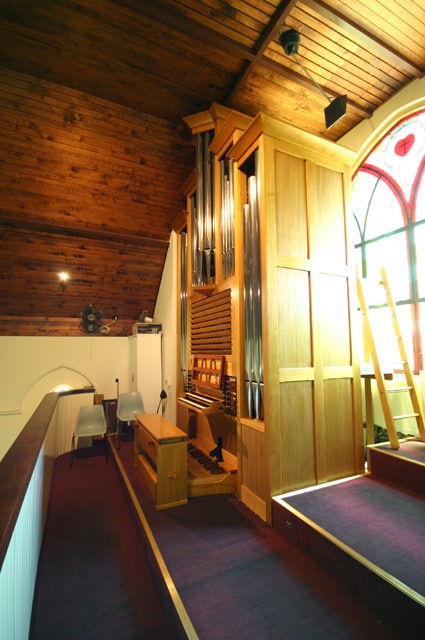 In May 2000 Nazareth Lutheran Church, Hawthorne Street, Woolloongabba, burnt down by arson attack. All that was left were the brick walls. The church had been built in 1896 for the Lutheran congregation of South Brisbane that had been founded in the 1860s. As with South Australia, there was an influx of German migrants to Moreton Bay and as a result the Lutheran church has had a strong presence in South East Queensland.

In 1976 Nazareth Lutheran bought the 1926 Whitehouse organ of St. Francis’ Anglican Church, Nundah. This pneumatic seven-rank, two manual and pedal organ served the church’s needs well; even if the action and specification could not be considered “inspired”. The sound of the organ worked remarkably well in the building. I well recall an organ society visit in 1999 when people remarked on the splendid sound this organ produced in the building. The organ was sited in a gallery at the back of the church and the building has a large acoustic for the size of the room.

The gutted building produced a sense of shock among the congregation. Nevertheless the decision was made to rebuild the church, using the surviving brick walls, to its original design. The decision was also made to refurnish the church to allow for a pipe organ. Although some second hand organs were contemplated, in the end it was felt better to go with a new pipe organ. After the congregation considered quotes from organ builders around Australia, they accepted my quote for a two manual 13 stop organ. The contract was signed in April, 2001. In March 2004 the addition of the Cornet II (which had been prepared for) was also contracted.

I met with the organ committee comprising of Frieda Reuther, Eric Lohe and Eric Parups. Frieda Reuter is the organist and was a music teacher at St. Peter’s Lutheran College. Her nephew is Dr. Peter Roennfeldt, the Director of the Queensland Conservatorium. Eric Parups is the architect who supervised the rebuilding of the burnt church and Eric Lohe is an organ enthusiast and President of the Congregation. In order to formulate our ideas we visited the Smenge organ at Beenleigh and my organs at Mt. Tamborine and the Pugin Chapel at St. Stephen’s Cathedral.

My original concept for the organ was relatively simple; I wanted the Great to have the sound and power of my organ at St. George’s, Mt. Tamborine, and the Swell to have the delicate and intimate sounds of the Pugin Chapel organ. The sound of very shrill mixtures and coarse voicing (which seem characteristic of modern neo-Classical organ building) had not impressed me. I was also not convinced that fully encased organs were the way to go. I had often found problems tuning organs of this design and the pipework can easily draw or pull. Therefore, I wanted the Swell behind the Great and the Great unenclosed so that the sound could run along the roof and drop down onto the congregation. This is the traditional English layout and had proved to be satisfactory in the previous organ in the church. Likewise, what could equal the wind supply from a nice double-rise bellows? And what indeed could equal the majesty and power of the spotted metal pipe? By using suspended action, I hoped this might give a more Baroque feel to the organ.