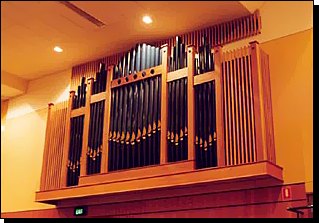 This instrument was originally built for Waverley Methodist Church, Sydney, by A. Hunter & Son of London in 1888. In 1974, this instrument was acquired by the Old Girls’ Association of Somerville House.  Whitehouse Bros. replaced the original tubular pneumatic action by an electro-pneumatic action.  The instrument was placed in Harker Hall, a multi-purpose assembly hall overlooking the sports fields. It was installed without any showfront. In 1984, J. W . Walker & Sons (Australia) cleaned the organ and added the Great Mixture, Choir Nazard and Tierce, and Pedal 4′ Flute. These replaced string stops on the manual soundboards.

In 1999, as part of the school’s centenary celebrations, a new auditorium was incorporated into the new Performing Arts Complex, and the organ was installed here with a new wind system, a new console, and a new showfront incorporating the show-pipe work in the original configuration. The bold, rich sound is now heard again in its full glory. 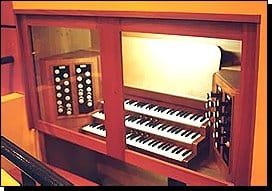 The console, viewed from the stage.

Left to right: The nether regions of the pipes;
looking down on the pipes in the organ chamber;
the new ivory stopknobs, clearly visible against the ebony backplate of the right-hand side of the console.
Note the original maker’s plate bottom left.