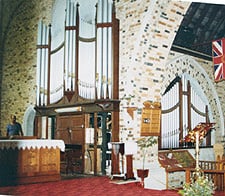 This tubular-pneumatic action instrument was installed by the British Pianoforte Depot Ltd. in 1914.  The English pipework and German mechanical components remained intact until rebuilds in 1957 and the early 1960’s.  General deterioration of the instrument saw the need for a proper restoration in the 1990’s, and, with the consultant Kelvin Hastie’s concurrence, our proposal for a conservative restoration (with the judicious replacement of some later-added stops) was accepted in 1994.  This process was carried out in two stages: