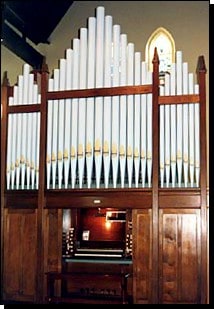 This excellent example of tracker action organ building was built and installed by B.B.Whitehouse & Co. in 1910.  In 1936 the church was extended southwards by turning the nave around 180 degrees and adding a large Romanesque crossing with north and south transepts, the altar being relocated to the southern wall of the building.  The organ was installed in the south transept but spoke towards the altar and hence away from the congregation. The rebuild by Simon Pierce in 1991 included turning the whole instrument to speak across the nave, thus supporting congregational singing more directly.  At this time, a Trumpet stop was installed in the prepared slide on the Great. The scaling of the Trumpet was taken from the 1915 B. B. Whitehouse organ in St Mary’s, Ipswich.

During 2000, the building was treated for a termite infestation, after which cleaning of the instrument became necessary and was undertaken by the firm in October.