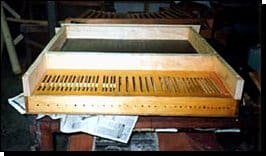 This organ was built as a memorial to Christopher Fulcher by his family.  It was originally designed for the small wooden church which is now the hall and was built in stages over 6 years. The present delightful church was built in between times and the organ was installed just after the church’s completion.

It is a complete single-manual organ, employing simplicity to encourage its use by reluctant organists. The organ’s concept is based on English 1850’s scaling and soundboard design – that of William Hill. The suspended action and modern pallets give a light, responsive touch despite the very sudden climatic changes that can occur on the mountain.  This alteration to ethos does not detract from the overall concept.  The idea of building the organ in stages enabled the family to contemplate the project without financial strain, but is only possible when the total project is conceived as a whole.

This is the underside of one of the soundboards showing the palletbox. The soundboard has been built in the traditional English manner with “tosh” or calico covering the rear of the bars. There are two soundboards, one for the C-side and another for the C#-side, a typical setout for early large Hill soundboards. 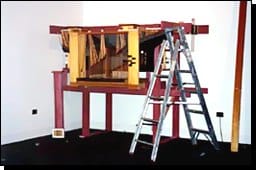 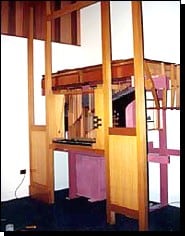 The soundboards are now fitted to the standframe with the stop action and key action connected. The front case is now being fitted around the action. This type of design is different from modern European practice where the case is also the standframe of the organ. As the concept of this organ is based on English 1850’s style, so too is the design. The double-rise bellows are yet to be fitted. The casework is made from Tasmanian oak and is french polished. 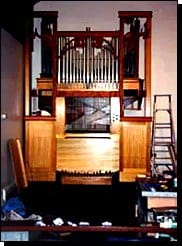 Here the organ is starting to take shape. The pipes have been installed on the soundboard and it is playable. The pedalboard has been fitted. This pedalboard came secondhand (!) from the organ in St John’s Cathedral where Christopher Fulcher sang as a chorister. The possums on the casework are visible. There is a large window above the organ through which the unique rainforest of this area can be clearly seen, hence the possums look as if they have just come down from the canopy to have a listen. 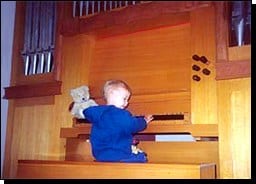 A budding organist plays the new instrument. The builder’s son, Lachlan, gives helpful advice on key depth and touch whilst the consultant looks on…

This organ has now been completed to its original specification, the Mixture pipes being added through late 2000.  A recital by Michael Fulcher on December 23, 2000, provided a stirring conclusion to a long and drawn-out but very interesting process of building by gradual accretion!