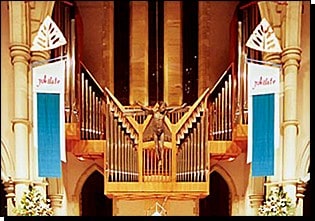 This organ was built by Knud Smenge of Melbourne in 2000. It is his Opus 50 and was the last major organ built by him. It has electric action with a moveable detached console. The case was designed by Robin Gibson. Robert Boughen was the consultant. This organ replaced the earlier c. 1890 William Anderson organ 3-manual organ that is now located in the Old Musuem building (former home of the Brisbane City Hall organ). Knud Smenge has built two other organs in Queensland, the Lutheran Church in Beenleigh and St Andrew’s Lutheran, Brisbane.