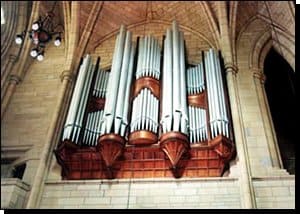 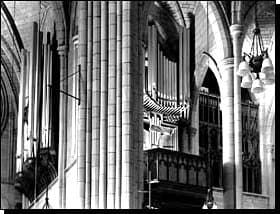 The organ was originally built with pneumatic action in 1909 by Norman and Beard of Norwich with the specification drawn up by the cathedral organist, George Sampson. At that time it was designed to hold 50 speaking ranks although some were prepared for, and a few added in 1912, 1914, 1915 & 1924.

The 1924 transcept case was a gift of the Brisbane City Council in commemoration of the centenary of white settlement in Queensland.  The organ was considerably enlarged and electrified by Hill, Norman and Beard (Aust.) in 1972, after the extension of the cathedral nave. Robert Boughen was the consultant and cathedral organist. Included at that time were the Solo strings, which came from Gloucester Cathedral and Southwell Minster.