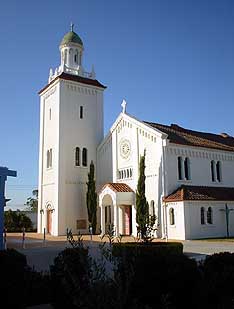 This organ was built for Holy Trinity by Whitehouse Bros. in 1930 in this magnificent building. Reginald Halse was the Anglican Archbishop of the day and he had brought back two designs from a holiday in Southern Italy. The other design was used for Holy Trinity, Mackay. The Stopped Diapason and 4′ Flute were added in 1954. In 1986, David Hudd replaced the Great Dulciana with a Principal 4′.

The organ is small in size for the building and with the restoration of the church, it was decided to restore the organ also and see if it could project better into the building from its chamber. Simon decided to position the organ better and to rescale several stops to match the building. The front case was rebuilt and moved out around the console and lifted. The soundboards were then moved forward. All the pneumatic action was thoroughly restored. The Swell Flutes were rescaled by 2 notes upwards and a new stronger Stopped Diapason was made. The wind pressure was raised and the cut-ups on the principals were accordingly raised. This pipe organ now has an excellent, responsive action and the warm and full sound adequately fills the building without being harsh. This little organ is a good essay in how pipe organs do not need to be large in order to carry out their work and still remain highly musical. 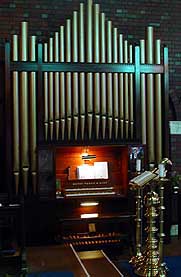