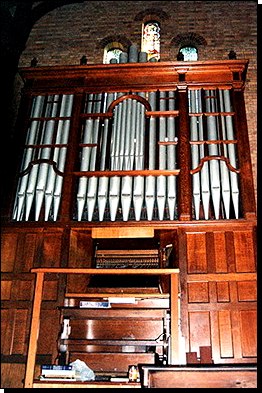 he Church of St Brigid’s stands as a sentinel on Red Hill over the City of Brisbane. From one side of the choir loft the whole vista of the ranges from Mount Coot-tha towards Cunningham’s Gap spreads before the eyes. On the other side, the busy modern buildings of Brisbane and the blue of Morton Bay mingle and the noise of restless activity assails the ears.

Inside, the quietness and the space of the church are a pleasing contrast. The acoustic is one of the best in Brisbane. The red brick structure was designed by Robin Dodds and was opened in 9th of August, 1914. The organ case was also designed by Dodds and sits in the back of the choir loft brooding under three narrow windows.

This pneumatic action organ is one of the most important that Whitehouse ever built. Together with the mechanical action 1910 Whitehouse in St Mary’ Church, Maryborough and the later pneumatic action organ in St Mary’s, Ipswich, they represent the high point of Whitehouse’s craft and vision. Whilst not large in the number of stops, none the less, all organs fill their homes with full and rich sounds more than comparable with the work of English builders of the same era.

Having restored Maryborough some ten years ago and having worked in stages on Ipswich, it was an opportunity to work in Brisbane with a sound knowledge of the methods and techniques that Whitehouse used. The organ had had two lots of work carried out on it over the last 30 years but the action was still sluggish and irregular, the pipework cyphered in the Westerly winds and the cone-tuned pipework was not in the best of conditions. The structure was still in remarkably original condition except for the loss of the Crescendo Pedal and mechanism some years before. It was time to systematically work through the whole organ and the organist, Roland Bartkowiak, started the initial process of convincing the parish to carry out the work..

Our approach was quite simple: to renew all the leather working parts of the organ and clean the pipework. The bellows had already been releathered but the gussets, corner pieces and butterflies needed releathering. This also meant replacin g all the puffers and cones of the cone-pallet soundboards, replacing the bedding and renewing the bedding. The pipework needed cleaning and any damage should be repaired. The pipework could then be regulated as well as the action.

This, then, was the simple task we had in front of us.  The reality was somewhat different. 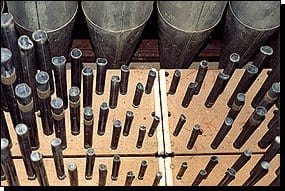 Restoration is an interesting term. It implies just renewing and cleaning what is already in existence. The organ was already regarded as a ‘masterpiece’ and it was important not to gild the lily. But, as we progressed we found we had to make decisions.

The inside of the soundboards were strewn with pencil marks as the builders had changed the position of the cones. Plugs of wood were profuse. The borings in the soundboards were very poor and looked like they had been done with blunt drills. There were chips of wood in many holes that appear to have never been cleared out.

All the soundboards were thoroughly cleaned and the borings re-drilled as necessary and sealed.

Over a third of the pipe feet were smaller than the footholes. In fact, it appeared that all the metal pipework arrived after the soundboards were made and over the time the feet of the principals and strings had sunk into the holes (with the cone tuning) and the footholes had, thus, closed up.

As we tested the completed soundboards in the workshop, we found that cyphers were still occurring. Closer examination showed that that the original tips of the borings of the upperboards had carried through out the other side of three of the upperboards. They looked like knotholes but were holes that caused cyphers. These were plugged and sealed. As well, on these soundboards the bedding was glued onto the bars. Later Whitehouse practice was to glue the bedding on the upperboards and then brown paper was then glued onto the top face of the bars. This allowed any warping in the upperboards not to cause cyphers whilst still allowing easy access to the cones. Given the past service history of the organ, we carried out this modification. 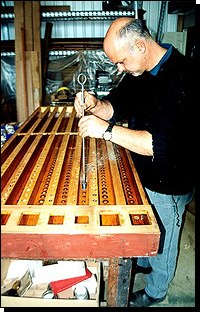 The bottom octave of the Swell reeds had never fitted in the space provided. Any damage had occurred from ‘day one’ and by placing Bottom C of the Cornopean on an off-note block this problem was cured.

The access to the organ was appalling. It is a particularly compact design, which is surprising for such a large gallery. The access to the passageboard is very tight, however we improved access to the rear of the console by making the front lower casework panels removable with only four brass screws. The internal organ frame was also very flimsy and leaned to one side. It had obviously moved very early in the organ’s life. The whole structure was straightened and fixed permanently to the back wall.

It is possible to draw some conclusions from this work. The firm had used cone-pallet soundboards in small instruments as early as 1910 (at Nundah Methodist) but Red Hill seems to have been the first large instrument to employ them. They solved many problems ‘on the run’. I also suspect that the work was rushed and the pipework only arrived from England after the major part of the organ was built. These problems were not evident in the later organ at Ipswich.

Tonally, we worked carefully on the organ. The idea was to preserve and maintain. We did not want to fit any slides to the pipework but over the years it had collapsed at the mouths and, in some cases, the tops had been ripped for tuning. The pipework was cleaned and repaired, and it was only necessary to fit slides to the Fifteenth 2′, the Piccolo 2′, the top octave of the 4′ Gemshorn and the Principal 4′.

As we worked through the regulation, two major things became obvious. The flutes had a very annoying splutter at the beginning of their speech which did not want to come out with the usual treatments. As well, all the reed tongues had to be very flat to speak promptly and as a result did not develop good tone. The obvious place was to check the bellows which appeared to have too low a wind pressure. It was nicely fitted with Whitehouse weights at 3 1/8″ w.g.. We found no other spare weights around the loft but tried raising the wind pressure to see what happened.

We found that 3 ¾” was the magic pressure, the flutes lost their splutter and the reeds could have their tongue curve increased with a pleasing fire being added. The strings developed a more intense character and the Great Open and Principal had more warmth. The action also was just a little crisper. Obviously, I do not want a reputation for fiddling with wind pressures on important historical organs but 3 ¾” is quite a common wind pressure for the era and the pipes really wanted the increase. I can only assume that the cyphers that had plagued the organ may have been lessened with a lower wind pressure. I was also interested to hear some observations from John Hopsick whose mother had been the organist at St Brigid’s from the 1920’s. He remembers the sound of the Great Trumpet as being far stronger in the 1940’s and was pleased to hear that strength back again with the increased pressure.

The organ had taken 7 months to restore with it being in continuous service during that time.

I went back today to take some more pictures of the organ and to listen to the sounds afresh. I am always astounded how the organ tone improves as the organ settles in. I have made some comments earlier about the problems we found in the organ. I believe, however, that in this case Whitehouse got the basics right. This organ does have a vision. The action is as crisp and responsive as could be desired and vindicates the restoration of the pneumatic action. In this case it is certainly preferable to electric action.

The Great Diapason is quite unlike any other Whitehouse Diapason. It is mellow and warm but possesses a tremendous presence in the building. The Principal 4′ is quite a deal smaller in scaling but has a bite that blends into the Diapason very nicely. Likewise the Fifteenth 2′ blends in well without being too strong. It is also delightful with the Stopped Diapason and does not scream with the Great Octave coupler.

The Swell is not so easy to judge at the console but the sound is slightly less powerful than the Great but with more string tone. The Double Diapason 16′ purrs underneath even with the reeds and octave couplers on. The strings are just gorgeous. The Pedal Bourdon 16′ is not a loud stop but seems to permeate and give the pedal focus. However, it is the Great Trumpet which is still to my mind the really amazing stop. It does cut through the Great chorus with a fiery breath and yet it is the flue work that predominates when the Great Octave coupler is added. Like all good organs, there are a variety of moods and colours available if the organist blends with imagination. It is a remarkable achievement for Whitehouse to make such a small organ fill such a large building with such good sound. At no stage do you feel that you need more stops. True, you might like to have them but this organ has a satisfying whole and unity about it which is as much a pleasure for the organbuilder as well as the organist.