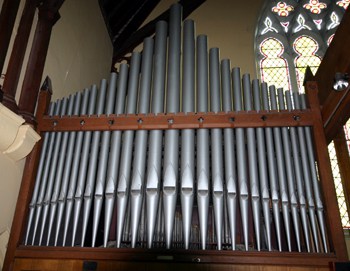 This organ was originally installed at the eastern end of the church on a gallery in 1885, having been sent from J.W. Walker’s and Sons workshops off Tottenham Court Road, London, the preceding year. It was then supplied with two manuals and a single pedal stop, with tracker action throughout.

In the 1930’s the straight pedal board was replaced by a radiating concave one, following the practice of the recently installed Brisbane City Hall instrument.

Later the organ was shifted to the northern transept, closer to the altar at the western end of the building.

More significant change came in the 1950’s when Charles Dirksen enlarged the Pedal department, placing the pipework in the opposite transept, using an electric action.

This was not completely satisfactory, as some of the upper notes were too prominent!

The pedal pipes were brought back to the organ case proper during the extension of the intrument to three manuals by Laurie Pipe Organs of Melbourne at which time the original tracker manual action was replaced by electric as well. The new choir pipes were accommodated in the opposite (southern or liturgical North) transept.

The organ is currently under appraisal for a restoration of the original tracker action, bringing the departments back to the original design.