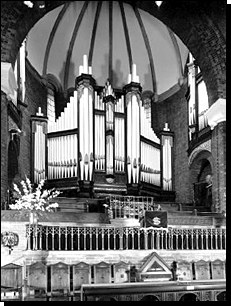 This organ was originally built by W. G. Rendall in 1905. Frederick Ernst Ladegast was the foreman and his hand can be seen in the werkprinzip layout of the organ, with the Swell above the Great which is in turn above the unenclosed Choir. The Pedal has four chests located on either side of the manual soundboards. The manual soundboards were supplied by Norman & Beard of Norwich. The case was built by King’s of Brisbane. The pipework appears to be older than 1900 and may contain parts of the Gray & Davidson organ of Pitt Street Congregational Church, Sydney.

Although this instrument started out in life as an Australian-made job, utilising new technology with its electro-pneumatic action, like many pioneers it was not entirely satisfactory in execution. The organ was highly erratic and the story goes that when the trams ran down Ann St, when they reached the church they would drain the power and the organ would stop playing!

In 1908, before the instrument was five years old, the original electric action was replaced with a more reliable tubular-pneumatic one, and another Diapason 8′ was added to the Great, the original proving inadequate to its surroundings. This was carried out by B. B. Whitehouse and there is a signature of Arthur Langham, the foreman, high up on the case and dated 1907.

More stops were added in 1922. Changes were made in 1935, 1941 and 1955 but the most significant was a complete rebuild by J.W. Walker and Sons in 1983-4. Simon was working as a trainee at the time and worked with David Hudd. Paul Fulcher voiced the organ and it was from Paul that Simon received his first voicing training.