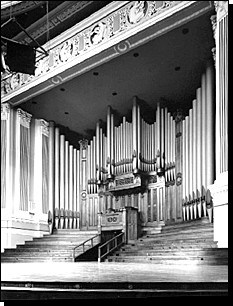 This instrument was originally built by Henry Willis and Sons in England between 1891-2 and first erected in the Brisbane Exhibition Hall, Bowen Park.  At that time it had 4 manuals and 45 speaking stops, with tubular pneumatic action – a very advanced design for the period.  While the first recital was held in 1892 for the members of the Royal National Association (the governing body of the Exhibition), public concerts were a popular attraction for many years.

In the 1920’s, the Association faced financial problems and thought of selling the instrument interstate. Mr. George Sampson, Organist at St. John’s Cathedral, suggested that it be acquired for the Civic Hall being built on King George Square and arranged a number of subscription concerts to help defray costs.

Opportunity was taken at this time to enlarge and modernise the instrument.  Henry Willis and Sons, working in conjunction with local organ builders Whitehouse Brothers, converted the action to electro-pneumatic.  In 1930, the rebuilt instrument with five manuals and pedals, containing seventy-six speaking stops, was playing again.

Regular concerts were given by the City Organists and visiting celebrities as well as local promising students.  For many years orchestral works involving the organ were a feature of Symphony Concerts and Recitals.

Some 40 years after its first rebuild, it became apparent that much of the electrical work needed replacement and opportunity was taken to resite the Solo and Choir departments.  Bringing the Solo into the one area brought into focus the desirability of rearranging the Solo Tuba as a 16′.  New pipework was provided for the 8′ Tuba and Tuba Clarion 4′.  As well, the Great and Pedal were provided each with a new Mixture stop, while the Choir was enlarged by a Sesquialtera II.  All of this work, as well as the installation of a solid state capture system, was undertaken by NSW builders Brown and Arkley, thus bringing the instrument to seventy-eight speaking stops.

Since then WJ Simon Pierce has undertaken the general maintenance and repair of the instrument; sometimes – alarmingly – just before, or in the middle of, public recitals!